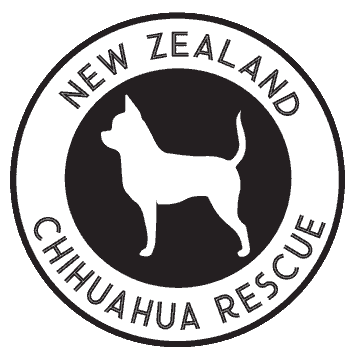 We are always happy to confidentially assist breeders with re-homing of  ex-breeding dogs. The below is a review from Teddee Kennels, breeders and exhibitors who NZCR helped re-home many of their dogs.

"Prior to Christmas 2017, my husband suffered a horrendous accident and suffered several long term injuries requiring surgery. This, coupled with the fact that my 105 year old Mother only had weeks to live, meant that we had to reconsider our future. As long-time owners of breeding and show kennels for Chihuahuas (long coat and smooth coat) we were forced to make decisions we had hoped we would not have to make. With heartbreak and tears I contacted Casey from the Chihuahua Rescue Trust to see if she could help. This was the most sensible thing I could have done as within a week we had dogs winging their way to Christchurch to wonderful pet homes and others placed through the website into Homes closer to Auckland where we could meet the new pet owners. Our sincere thanks go to Casey, The Trust and their helpers for making this sad process of re-homing our much loved and treasured Chihuahuas that much more manageable. To anyone finding themselves in a position where they need to rehome their Chihuahua please don’t hesitate to contact Casey and the Trust for help. We flew our dogs to Christchurch knowing they were going to be safe.”

- Cheryl and Peter of Teddee Kennels

Frankie is one of the “pound pups” we adopted out from Opotiki Animal Shelter alongside his sister "Ruby". Full details in terms of his rescue and adoption story can be found under the tab “success stories”.

"I met Frank for the first time at the NZCR open day at Pet Central. He was such a chill wee dude who was relaxed despite all the strange faces. I told my husband about the wee guy I’d met, and how I thought he might be a great playmate for Penny. We submitted an application and decided to see how it went. Casey kindly agreed to bring Frank (and a couple of their own dogs) for a play date and inspect our property for suitability. Frank was instantly drawn to my husband Dan. When Dan left the house for work 30min later, Frank sat staring at the door Dan left through! Eventually Frank and Penny tentatively started playing together. We went through the rest of the adoption process and brought Frank home about a week later. He settled in right away! From day one Penny was ecstatic to have a playmate around the house. In the mornings, once Penny is let out of her crate she heads to Frank and wags her tail sniffing through the bars until we let Frank out. Once he’s out, it’s all on. Barking, tumbling, boxing, chasing. You’d think they were both still pups! Its adorable to watch. They’re like little peas in a pod, and not just because they have similar coloring. But when Frank’s not playing, he’s the same chill wee dude he was at the open day. Always up for cuddles (he’s so cuddly!) or asleep beside his sister and is tolerant when she nags him to play. Casey and Alex made the adoption process so easy, communicating with us throughout the process so we were aware of what was required. Almost 6 months on, and Frank is still the absolute perfect fit for our family and in spite of raucous racing around  at any waking hour, we couldn’t imagine our lives without him."

We received an email asking us to assist with the re-homing of a Chi x Pap x Pomeranian sweetheart named Pollie. We promptly met with the owners and took Pollie into foster care where she was rapidly adopted out into her new loving home. The former owners and Pollie's Adopters have also chosen to remain in touch with one another and share updates with each other as to how Pollie is doing in her new home.

"We unfortunately had to make the heart-breaking decision to give over our dog Pollie to the Trust. We had recently had two small human additions to our family, making it a much busier environment and Pollie was not getting all the love and attention she needed and deserved. Pollie also wasn’t overly fond of our other, older dog. We could tell that she was beginning to find the environment stressful. A comment I saw from the Trust recently sums it up perfectly, “Unfortunately, sometimes, no matter how much you love and adore a dog, you have to be honest with yourself and whether you are truly the best home for them.” We wanted to make sure Pollie’s next home was the perfect environment for her, and worried about how we would ensure this, especially if we attempted re-homing her ourselves. After some research we came across the Trust and could see they had excellent processes in place to ensure this happened. We got in touch with them, and found Casey and Alex to be very understanding and caring. They were also excellent at keeping us updated along the way. Pollie now has the perfect forever home where she is the centre of attention and will be much happier! We are so glad that this Trust exists and can’t thank Casey and Alex enough for helping our family in a tricky situation."

Roxy was adopted by her family in September 2017 at the age of 8 months. Roxy was surrendered to a local Vet with 11 of her siblings and then found herself with Chihuahua rescue for re-homing. After receiving foster care for a couple of months, Roxy now lives the life of a princess.

“We have recently had the pleasure of adopting our gorgeous Roxy through the NZ Chihuahua rescue group. The rescue group was amazing. They first established what sort of home environment we had and worked with us to find a perfect match. Then they ensured we were responsible and able to provide the right home to make sure Roxy would thrive and it was the perfect fit. It couldn’t have worked out better as she is absolutely the perfect girl for us. We are all madly in love with her! We were also given lots of support from the rescue group. The group is professional and compassionate and has the best interest for Chihuahuas at heart. I can’t say how grateful I am this group exists and so incredibly thankful for all the lives they have helped- thank you!”

Bonnie was one of 11 dogs surrendered from a hoarding situation in 2017. After several months in foster care with NZ Chihuahua Rescue working on some behavioral issues, toilet-training and her wariness of humans, Bonnie was then adopted to a couple in Greymouth who simply adore her.

"Bonnie has become an absolutely integral part of the family. Bonnie has her quirks which are just her and we really love her. She's best friends with Libby the Beagle but her soulmate is my partner John who cuddles her all night long and she cries greetings to him and talks to him."

NZ Chihuahua Rescue were asked to assist in the re-homing of a sweet little long coat Chihuahua named "Polar Bear" after his former owner unfortunately passed away and he was returned to his Breeder.

“Polar Bear is very happy and relaxed with his new Family in Timaru. He is Ray’s dog, his best friend died before Christmas and so did Polar Bears Dad. They were made for each other. When they left, Polar Bears eyes were firmly fixed on the road, as if he thought “woohoo- I'm going somewhere just like when my Dad took me out!” The Adopter and I keep in touch and have rung each other. Everyone is very happy. Ray takes him on walks and gets many compliments. Thank you so much for your help in finding him a beautiful life.”

- Beverley, Breeder of Polar Bear who was homed by NZCR.

Link back to the Success Stories